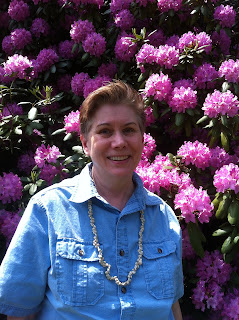 344 - Observe and appreciate flowering bushes and trees as they come into season.  I started the Spring with deep gratitude for the bursts of bright yellow Forsythia here and there.  Then I turned my attention to the fabulous Azalea bushes that started to flourish around town and under my kitchen window.  Next, I noticed the Dogwood trees that were livening up the neighborhood, including the two beloved Dogwoods in my yard.  Now my attention has turned to the sometimes enormous, amazing, and delightful Rhododendron bushes that often go two stories high!  We also have stunning Magnolia trees whose appeal sometimes makes driving a little swervy!  There are even yards that have several of these flowering bushes and trees in glorious bloom at the same time!

345 - Take a photograph of someone you like in front of a flowering bush or tree!  Who needs photo studio painted canvas backgrounds when you have Mother Nature?  This is my friend, Cathy, who loves gardening like I do.  We were having an adventure together that included gardening conversations and spotting Rhododendrons when we got the idea of photographing each other in front of a giant Rhododendron bush in my neighborhood.  Fun! 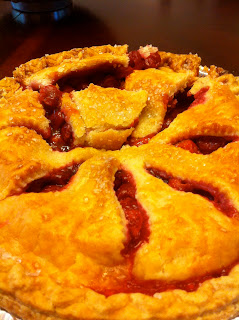 346 - Trying to decide between two kinds of pie?  Have a piece of both!  I was at a joyful baby shower recently for our beloved Sara, and there was an ecstatic array of delicious food, including many different pies.  I browsed the table, had some pie conversation with one of the hostesses, and narrowed it down to two possibilities.  Then I realized that I had never had two pieces of pie in my life, so the answer was obvious -- first eat one, then the other!  I felt like a renegade pie consumer on a sacred mission!  It was hilarious!  I wouldn't recommend this as a regular procedure though -- it might lead to pie addiction!  (By the way, the peanut butter chocolate pie won the taste test by far.)
Posted by Carol Bailey Floyd at 4:48 PM

Add your ideas to my "1,000 Fun Things to Do Challenge" by commenting on any recent post. Thank you!

Carol Bailey Floyd
My mission is to spread the message that fun and creativity are enriching, healing, energizing, and contribute enormously to a life of gratitude and celebrating possibilities!

SARK will happy up your world!